The server economy is kinda dead

You can talk about anything here.
Post Reply
61 posts

The elytra recipe seems bit expensive, personally preferred the 4 nether star and 4 phantom membranes recipe more, as an enchanted golden apple as a crafting component doesn't really solve any of the difficulties obtaining an elytra in the first place

The rest of the recipes seem alright for their respective rarity.

I agree and disagree with TheOneSoldier. If people do prefer the nether star crafting recipe over the god apple one, we have to incorporate netherite ingots to remove the farmable aspect of it. The amount should be debated, but elytras should not be easily farmable, but also not difficult.
I went to bed and looked at the stars

and then I thought...

Where is my ceiling?
Top

I would also advocate to swap out the gold apple with a netherite block in the elytra recipe. Netherite is limited as well but can be obtained with effort, unlike the notch apple where its pure rng or periodically gifted in events.
Top

For the snout banner pattern, I'd like to see something related to piglins, rather than hoglins, since it represents a piglin snout, and not a hoglin snout. Preferably a gold ingot or something made out of gold.
For the elytra recipe, I'd like to not comment anything, since whatever I say is gonna be biased (really you gotta trust me on this).
For the trident in the heart of the sea, will there be problems if it isn't at full durability? Cause then it will add a mending book to the work to get it back up and remove from a grindstone.
Other than that, I like what I see, and looking forward to see how the economy will adapt to this.
Popping Up At The Top!
Top 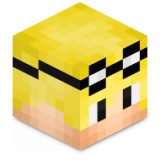 I do agree that the use of a notch apple doesn't make elytra any easier to get. Outside of event boxes, it just shifts the searching to the overworld. However, I still like the concept that you can use your notch apples for that as most people just shove them away in a chest forever.

What if we had two recipes for elytra? Both have 4 membranes and two string, but one with a notch apple and one with a netherite block. I could also see one with three string across the top and four nether stars instead of membranes.
Stay at home, Save the world.

"Asking for help is never an admission of defeat."
― Unknown

Can't you just grow tall grass/ferns with bonemeal? idk if we need a recipe for that
Top

Large ferns and tall grass drop two small ferns and two small grass respectively when broken with shears, even if you use silk touch.
Stay at home, Save the world.

"Asking for help is never an admission of defeat."
― Unknown

TheHypnon wrote: ↑
27 Nov 2020, 03:33
I would also advocate to swap out the gold apple with a netherite block in the elytra recipe. Netherite is limited as well but can be obtained with effort, unlike the notch apple where its pure rng or periodically gifted in events.

+1 on the netherite block idea. Hard to get but not impossible

Any update on the state of trades or the senior meeting? Last real update was on the 27th of November.
Also, are there any idea/plans to improve/revitalize the currently dead economy? Rhines are still tedious to obtain without the involvement of other players or mining diamonds.

In my opinion, the rhine situation can only be solved by readjusting the prices on the ways of obtaining rhines. The BH community made the pricing group and elected ACommence to make a good list, which was calibrated to September/October traffic, and December traffic is a lot slower, meaning fewer transactions happening (in numbers). It's either the pricing group to figure out someway to change something to allow players to obtain rhines, or the senior side of BH incorporate more ways to sell things to the server (ei bringing the old stone selling prices back). There's also the third option to have the server incorporate the admin shops that were in V2, but from my understanding that is very unlikely to happen.

Another weird but wonderful idea is having voting give you a number of rhines (to be decided). Could encourage the whole voting thing
I went to bed and looked at the stars

and then I thought...